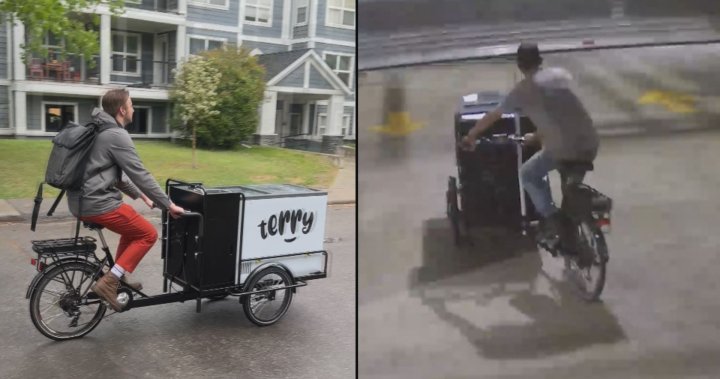 A bike theft has put the chill on a Calgary ice cream company looking to take advantage of the remaining month of summer.

The overseas-made tricycle with battery-powered refrigeration compartment took Taikov and his colleagues six months to source due to pandemic-related supply chain issues, and cost them $12,000.

“Our entire business revolves around this bike that we have.”

The company has been able to sell its “ice cream for everyone” at outdoor events like the Lilac Festival in Mission and Sunfest in Inglewood.

“And now coming to these events is going to be a lot more tricky.”

Security camera footage shows a pair of people getting into a storage area in an Inglewood condo complex at around 6 pm on July 31.

Taikov said it took less than 15 minutes for the suspects to cut through the locks and wheel the bike out.

“We caught on about 30 minutes later and we noticed we were getting messages: ‘Oh somebody’s riding your bike downtown,’ ‘Are you guys doing a pop-up today?'” he recalls. “We had reports of an individual going across the Peace Bridge saying that we were sold out, yelling that the ice cream sold out.”

The bike was also spotted in Inglewood, the East Village and Chinatown.

Friends, fans and family went on an immediate search for the branded ice cream bike, to no avail.

Taikov and his team did not immediately recognize the individuals on CCTV, and Calgary police are investigating the theft.

The stolen ice cream bike had a battery-powered drivetrain, something that may deter the culprits when the bike’s batteries die.

“It’s an incredibly heavy bike without a charged battery on it to move it around,” Taikov said. “No, they don’t have the charger. It’s not an easy charger to find – it’s very proprietary to the bike.”

The nascent dairy-free ice cream company still has events to go to and frozen treats to sell. And they’re fundraising in the hope of replacing the bike or finding an alternative for the hot days ahead.