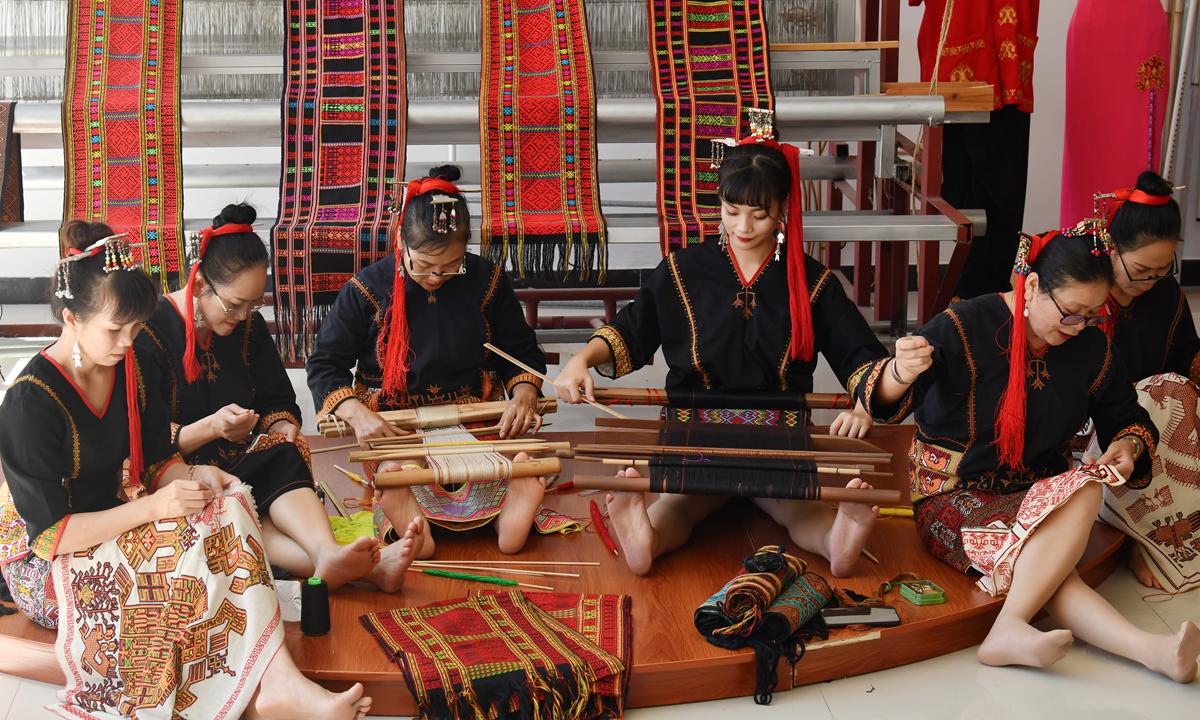 The interesting outfit is only one of the prolific designs that Zhang has come up with over the past nine years. Over these years, she has been striving to rejuvenate the intangible cultural heritage through launching creative events, both online and offline, which have intrigued not only consumers, but also future Gen Z inheritors.

Keeping tradition up to date

This realization gave Zhang the determination to go back to the small village where she grew up with the ambition to promote the 3,000-year-old folk art and make it part of people’s everyday lives again.

“People pursue beauty that is in step with the times. We should combine the aesthetics of Li brocade with modern designs,” Zhang told the Global Times.

This led her to start her entrepreneurial journey. In 2016, she founded a handicraft cooperative in the county and over the past five years it has grown from a business belonging to an individual to a large collective.

Zhang noted that every year she recruits trainees who want to become “future Li embroiderers,” The cooperative’s lecturers, which include herself, give lessons that focus on technique and creative development.

“The creativity training mainly focuses on designs. For example, what kinds of patterns can be used for toys, earrings and such but still express traditional Li brocade aesthetics,” Zhang explained.

Following the expanding number of participants in her cooperative, Zhang said she feels it is her responsibility to help her community earn a living from making Li brocade.

Traditionally, Li brocade was made by women. While the handicraft has survived into the present, previous circumstances such as the isolation of the county due to a lack of roads or a lack of products that cater to a wider market led to it almost withering away completely.

Zhang said she is willing to go that extra mile to rejuvenate the tradition by experimenting with various new products that target the tastes of customers from all over the country.

Current products with the cooperative tag include women’s clothing such as a casual cheongsam with Li ethnic patterns, accessories such as earrings and a phone pouch that Zhang believes is suitable for customers’ daily use, especially in more urbanized cities.

Her biggest clients come from Fujian Province and major cities such as Shanghai, Hangzhou and Beijing.

She has also turned to the internet by streaming on social media platforms to bring in more clients.

“Only introducing Li brocade was not eye-catching. So, now I choreograph some dances, to promote the culture online.”

The entrepreneur is not the only one to put in extra effort on behalf of Li brocade. The local government has stepped in to offer supportive policies for businesses like Zhang’s cooperative.

In May 2021, the General Office of the Hainan Provincial People’s Government released a three-year action plan for the protection and development of traditional Li brocade.

Besides outlining the establishment of an “online industrial park + offline production base” system, it also made other creative moves such as bringing Li brocade to duty free shops and setting up a Li ethnic embroidery and clothing major in secondary vocational schools.

In a bigger picture, 10 departments in China, including the Ministry of Culture and Tourism, issued a notice on promoting high-quality inheritance and development of traditional craftsmanship on Tuesday. The move highlights the importance the government places on “connections between traditional culture and modern life.”

According to the notice, improvement of mechanisms to ensure high-quality inheritance and the development of traditional handicrafts will be a focus until 2025.

“It is a common effort for us, the government and society,” Zhang noted.