The southern US state of Kentucky suffered record rainfall over July, unleashing fatal floods in Appalachian mountain towns as the phenomena of La Niña and the disruption of the jet stream contribute to extreme weather patterns globally.

At least 37 people died in Kentucky and hundreds were displaced from their homes because of the floods that left rescue services scrambling to contain the damage. Kentucky governor Andy Beshear estimated that more than 1,300 people had required rescue at the beginning of the week.

US president Joe Biden announced on Friday that he would visit eastern Kentucky on Monday to visit families affected by the flooding and see recovery efforts.

The heaviest rainfall was in south and eastern Kentucky, which experienced more than three times the average monthly rainfall for July in a 24 hour period. The National Weather Service office in Jackson reported its wettest July on record with 14.86 inches (37.74cm) of rain.

William Haneberg, a research professor of earth and environmental science at the University of Kentucky, said the rain and flooding were “unprecedented in our lifetime and in the hydrological record books”.

Scientists say the La Niña phenomenon, which involves a large-scale cooling of the Pacific Ocean’s surface and drives changes in wind and rainfall patterns around the world, is a contributing factor. Relentless floods on the Australian east coast this year have also been attributed to this pattern.

Typically, La Niña shifts mid-latitude jet streams across the US and produces cooler and wetter than average weather across the Pacific Northwest and entire southern US states are warmer and drier, according to the National Oceanic and Atmospheric Administration.

In the spring, NOAA forecast an above average summer rainfall for Florida, Indiana, Kentucky, Ohio, Virginia, West Virginia and Pennsylvania.

“We’re heading into our third year of La Niña conditions and the disruption of jet stream conditions across the earth,” said Schargorodski. “Because of where Kentucky is, it puts us at high risk of these extreme weather events.

“This rain has been remarkable, but it has happened multiple times over the last few years. This has definitely been broader, though — it’s affected a much broader area.”

The University of Kentucky’s Haneberg said surface mining may have exacerbated the flooding after landslides at some mountaintop mine embankments in Kentucky before the storm.

But research into how surface mining influenced flooding was “equivocal”, he said, and would require further analysis. “Last week was not normal.” 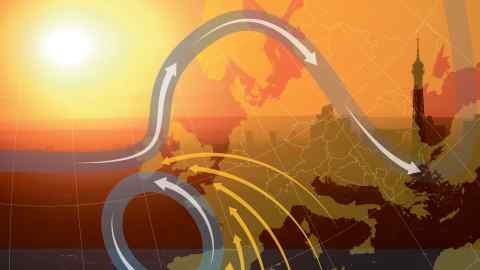 According to the US Energy Information Administration, Kentucky has around 20 percent of all coal mines in the US, the most of any state other than West Virginia and Pennsylvania.

Some researchers have found that land that had been subject to surface mining and stripped of trees and ground vegetation could exacerbate the runoff of water during heavy rains and worsen flooding.

A study published in Nature Climate Change concluded that annual flooding costs in the US could increase 26 percent by 2050 to $40.6bn as a result of climate change.

It also found that flood-related losses are disproportionately borne by poorer communities.

Kentucky climatologist Schargorodski also noted that while the state’s eastern counties had experienced flooding, western counties were suffering from extreme drought, with some areas receiving less than one inch of rain over the past month. “It’s really unfortunate,” she added.

Earlier this week, US vice-president Kamala Harris linked the deadly flooding in Kentucky to climate change, which she called an “immediate” and “urgent” crisis.

Last year, the US experienced 20 climate-related disasters that caused over $1bn in damage, compared to around six equivalent disasters in the 1990s, Harris said, referencing a NOAA report.

“The frequency has accelerated in a relatively short period of time,” she added. “The science is clear. Extreme weather will only get worse and the climate crisis will only accelerate.″

Are you curious about the FT’s environmental sustainability commitments? Find out more about our science-based targets here