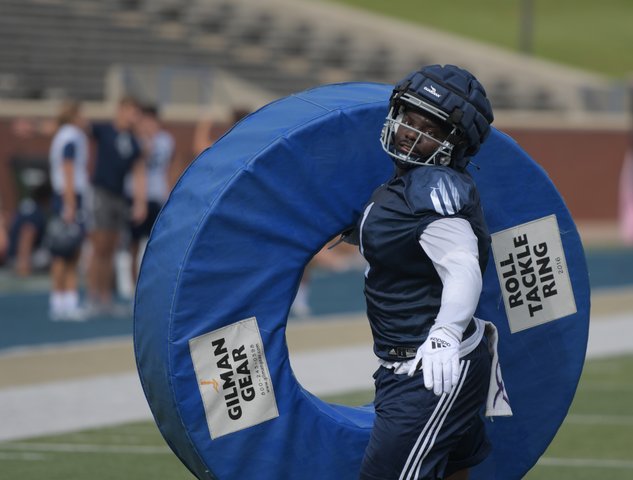 Georgia Southern coach Clay Helton has said how important it has been to have been hired in November, rather than at the end of the football season. At that time, he was able to observe and evaluate players, including the seniors to help him decide who he might want to target to try and bring back for the 2022 season.

“The guys we brought back are men of character and discipline and accountability,” said Helton. “They want to leave a legacy and leave with a good taste in their mouths. When you look at guys like Justin Ellis, Todd Glenn-Bradley and Logan Langemeier and Brian Miller you are talking about guys who are natural born leaders and I really appreciate their character and their love for this University.”

Helton felt with bringing in over 30 new players it was crucial to have leadership from guys who had been around the program for a while.

“You can’t put a price on that veteran leadership.” said Helton. “Having played in this league for so many years and having gone through the battles they have, these guys are invaluable.”

The Eagles have several players who decided to come back for their sixth, and even seventh season. Many felt they didn’t want to end their college careers with a 3-win season, but also said the idea of ​​starting something new with a coach they felt could get them to another level was important as well.

“I met with coach Helton last year after the season as I wasn’t sure if I was going to move on or what,” said Eagle senior defensive lineman Justin Ellis. “The things he was planning to do like with our nutritionist and strength program really intrigued me. As far as the new defensive scheme it had me more on the edge as opposed to the inside and I liked that. I also liked the changes to the offense which I think will really help us score more points.”

Eagle elder statesman Todd Bradley-Glenn is in his seventh pre-season practice. Glenn was debating whether or not to hang up his cleats for good when Helton was hired, and he liked what he was seeing and hearing from the new coach.

“At the end of the season I had a chance to sit down with coach Helton,” said Bradley-Glenn. “I felt like my goals and what I wanted to get out of playing football were still within reach. I liked what coach Helton had to say and I took a few days and talked it over with my family and decided to give it another year.”

Friday Bradley-Glenn was wearing a t-shirt that said “Back from the Dead” on the front. He says that is in reference to people assuming he was finished, but he’s back to prove them wrong.

“I have ‘last of the hard’ on the back and this shirt tells a lot about me,” said Bradley-Glenn. “People wrote me off, but I am back to show them I still have some more in my tank. With all my injuries and just my life overall I feel like this is a chance to write a better ending.”

For offensive lineman Brain Miller he was already leaning toward coming back, but the idea of ​​a totally different offense was something that sealed the deal.

“Running an offense like this where it’s a lot more wide open is exciting,” said Miller. “It was really a no-brainer after I discussed things with coach Helton at the end of the season. Being injured, this is really only my fourth year of actually playing, and I will get to have a double major which will help me after school is finished. I really think we are going to be able to do some great things this season and I’m anxious to get the season underway.”

The Eagles will continue practicing at 10:00 am up until the start of school on August 11. The season opener is Sept. 3 at 6:00 against Morgan State. Season tickets can be purchased at gseagles.com