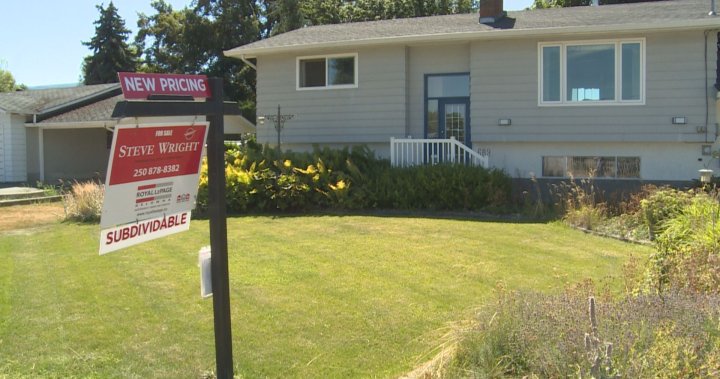 Residential real estate sales across the Okanagan slid in the month of July, so much so that the Association of Interior Realtors is reporting pre-pandemic level activity across the region.

Nearly 1200 residential unit sales were finalized across the Interior region last month — a 33.3 per cent drop compared to the number of units sold during July of last year.

“The market topped in March and so we’ve seen it correcting since then,” explains Royal LePage realtor, Steve Wright.

Wright says now is a good time for those looking to buy to get serious. “Typically, it takes a seller anywhere between 4 and 6 months of denial to figure out that they have to drop their price. Meanwhile the buyer has figured it out in about 4 to 6 minutes,” explained Wright.

“So yes, we’re seeing lots of price corrections for those that have a want or a need to sell, but there are still people…fishing for a sucker fish.”

Despite home sales for the month of July in the region dropping to pre-pandemic activity, Wright says there are a few hot spots in the south Okanagan that are catching his attention.

“I’ve done a number of sales down in the Osoyoos area this year and prices are about the same, maybe a little less but about the same as Kelowna. Oliver is probably a little bit less expensive. OK Falls and Penticton trailing but not by much,” Wright explained.

One trend to watch for in Kelowna according to Wright will be the development of high rises in the city’s downtown.

“It’ll be interesting to see when they release those, you know whether they get bought up 85, 90 per cent like the existing ones,” said Wright. “One Water, Ella and some of these other ones downtown… So, we’ll be kind of looking to see when those are released, how many people actually step up.”

There are currently 7,698 active listings with the Association of Interior Realtors, which includes the Okanagan, Shuswap/Revelstoke, South Peace River area and the Kootenays, a 56.8 per cent jump from July of 2021.