A little less than one year ago I asked Are US Housing Prices Becoming Unaffordable?

At the time, the Case Shiller National Home Price Index had just hit a new all-time high for year-over-year price gains of around 20%.

But if you adjusted those monthly payments for inflation things didn’t look so bad: 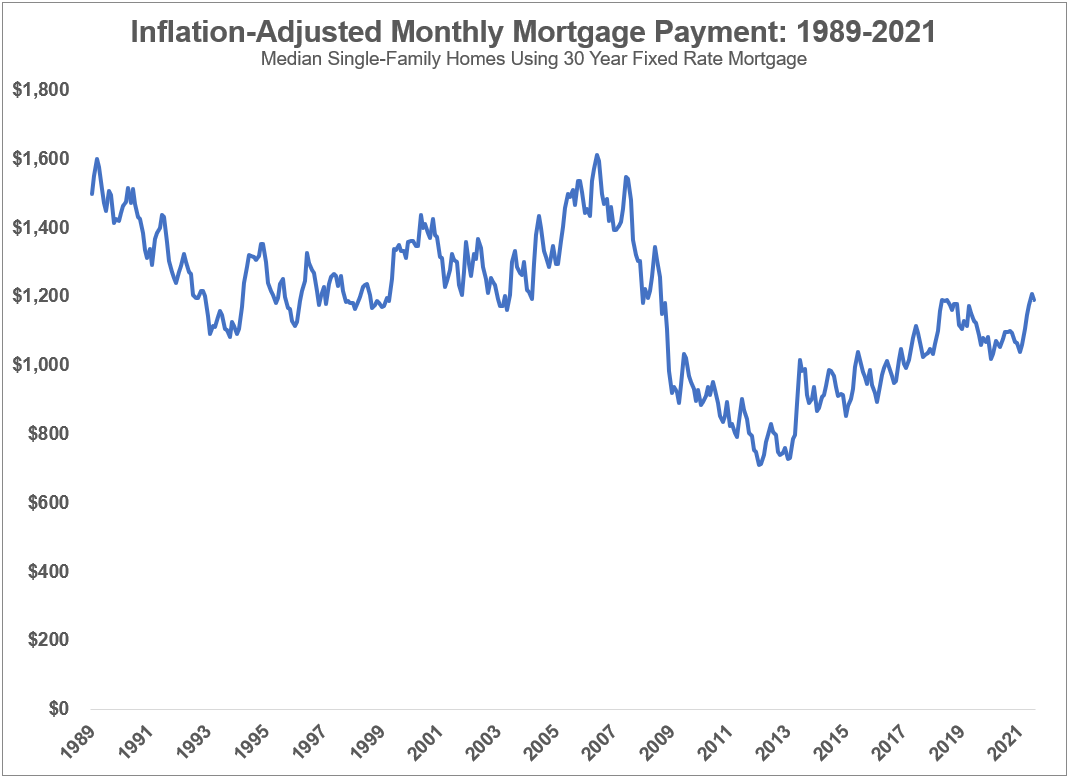 Adjusted for low interest rates and inflation, mortgage payments were much higher in the 1980s and 1990s.

But it was low mortgage rates that really helped that affordability. Here’s what I said at the time:

The one variable that could throw a wrench into this equation would be higher mortgage rates.

Rising rates are even more impactful than rising prices on your monthly payments.

If rates were to rise substantially, you would expect housing prices to fall, at least in theory.

The worst-case scenario for would-be first-time homebuyers would be for mortgage rates to rise while prices don’t fall. Demand would surely soften if rates rise past a certain threshold, but I have no idea what that threshold is. And there is no guarantee housing prices would immediately fall if rates do rise.

Well, mortgage rates have risen, more than doubling from those levels to more than 6%.

Let’s look at these charts just one year later. The median mortgage payment is now off the charts from a continued increase in home prices and much higher mortgage rates: 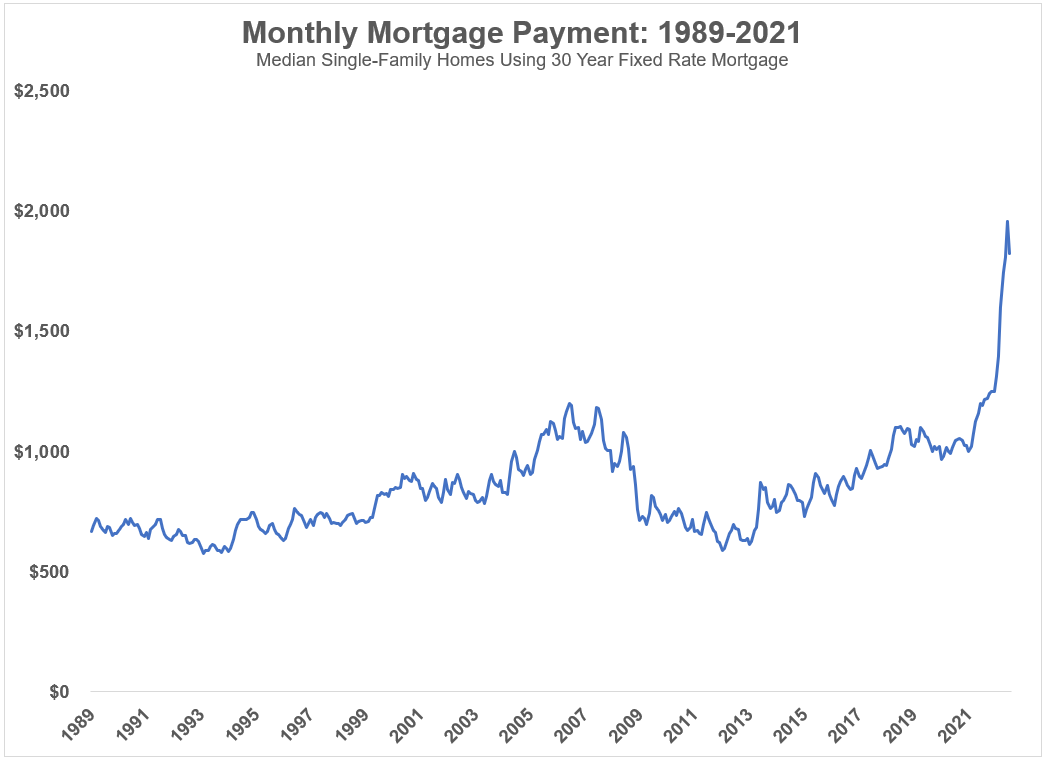 Look at that blow-off. Not good for anyone looking to buy their first home.

Now let’s see how things look on an inflation-adjusted basis: 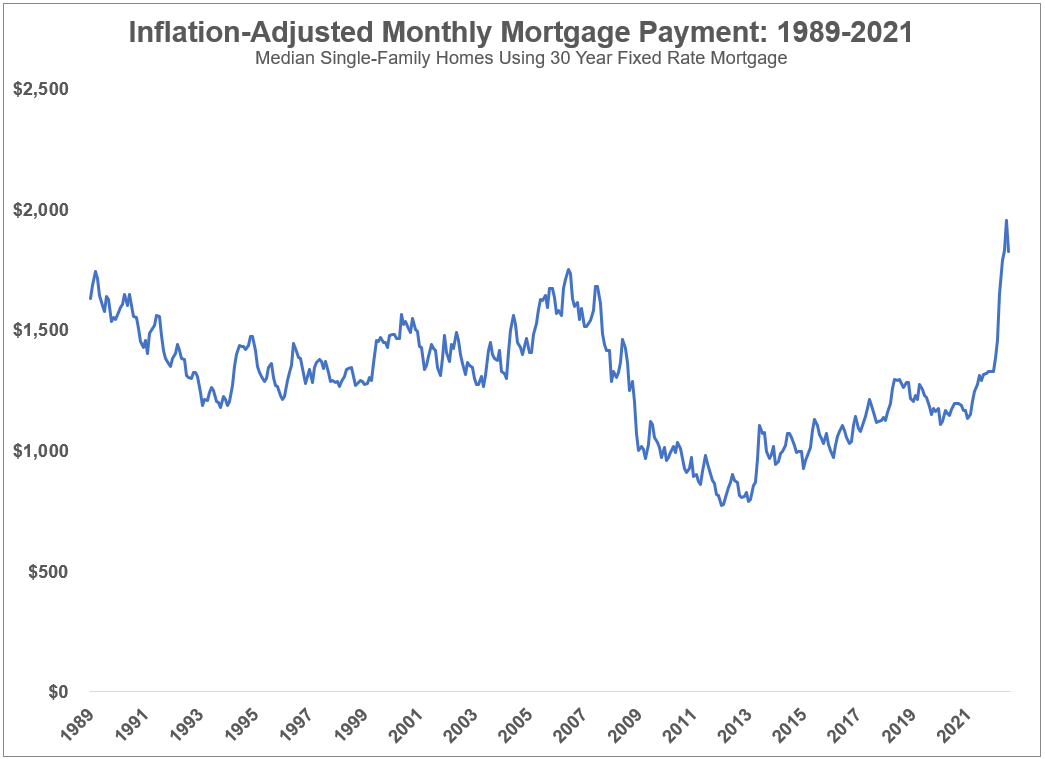 This is the worst level of unaffordability we’ve seen since the late 1980s and it happened in the blink of an eye.1

The homeownership rate in the United States is around two-thirds: 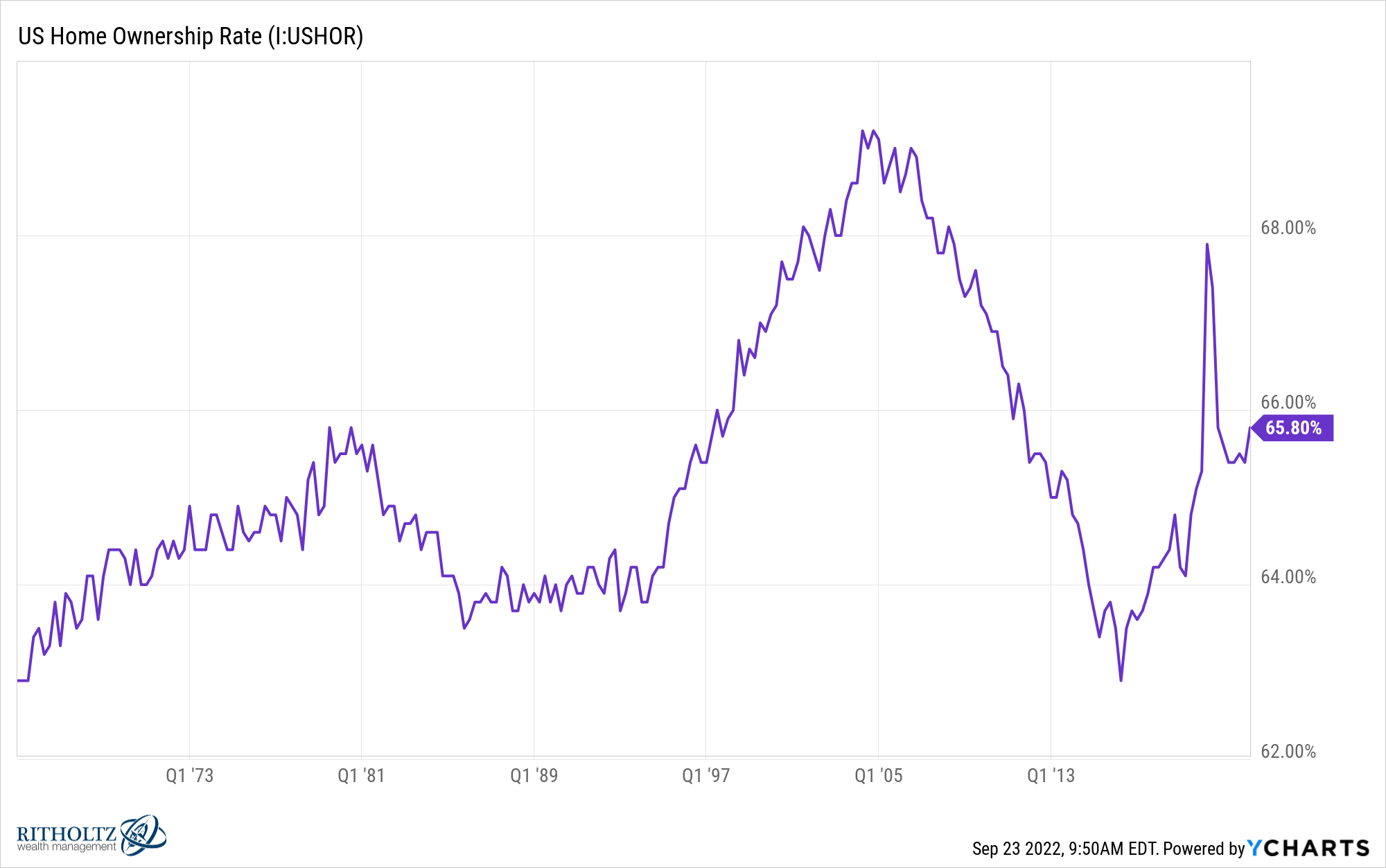 If you’re one of the lucky people in this group who purchased a home pre-2022 and locked in a rate of 3% or lower, these affordability numbers don’t matter to you (unless you plan on trading up).

And it is lucky if you happened to buy or refinance in recent years.

Let’s say you’re an older millennial who purchased a home sometime between 2015-2020.

The value of your home is probably up 40-60%. Your mortgage rate is around 3% range. That means the Fed’s short-term borrowing rate is now higher than your fixed rate mortgage, which just so happens to be one of the best inflation hedges you could ask for. Your payment is fixed and you’re much wealthier from the boom in home prices since 2020.

But what if you’re a younger millennial or Gen Z person who lives in a big city or missed the window to buy a house?

Your rent is rising at a fast clip. It is now much more expensive to buy a home and more or less unaffordable for many young people. Your best bet is buying a place now with a high mortgage rate and hoping the Fed lowers rates after they send us into a recession so you can refinance. Pick your poison.

If you happened to buy at lower prices with lower rates you’re not a genius. You got lucky.

And if you didn’t buy at lower prices with lower rates you’re not an idiot. It was a case of bad luck.

Unfortunately, luck permeates much of your financial experience.

I ran the numbers on a $10k annual investment into the S&P 500, adjusted for inflation, and the results are all over the map: 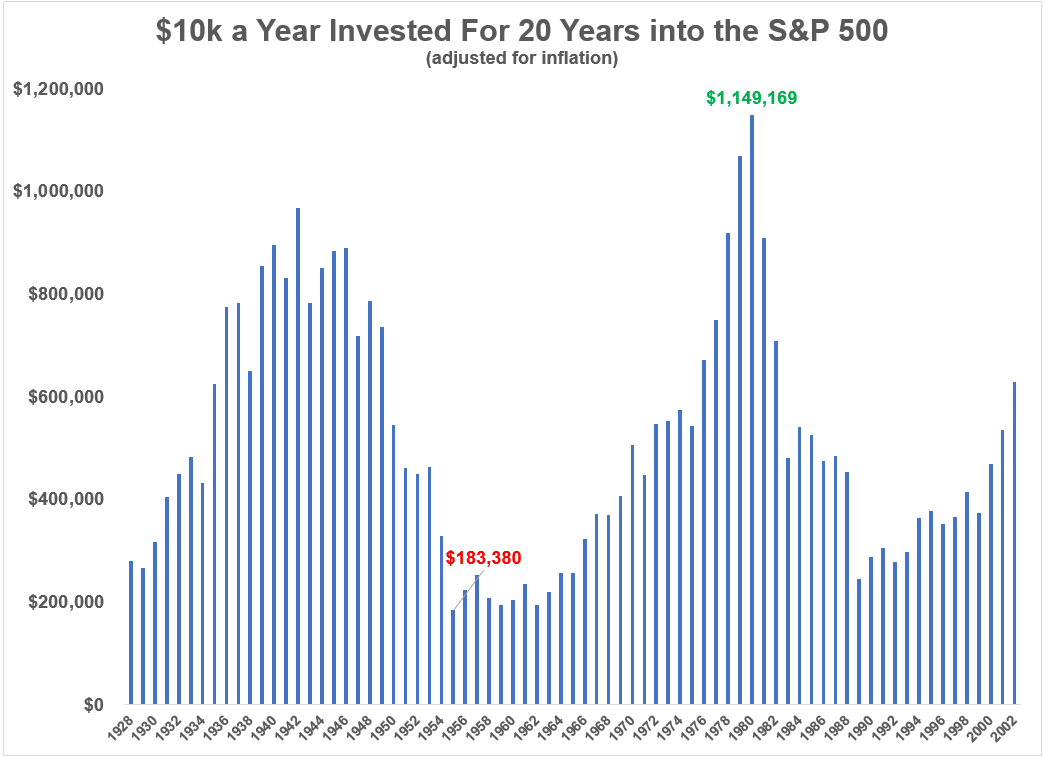 The difference between the best and worst outcome had nothing to do with the individual dutifully saving money and everything to do with when they were born and began saving.

Unfortunately, a lot of what happens with your financial life is out of your control.

You have no control over what happens in the stock market, the housing market, bond market or commodities market. You cannot control inflation or interest rates or tax rates or the Fed or what kind of financial situation you’re born into.

You can control your savings rate, asset allocation, diversification and work ethic.

It might not seem fair but sometimes you just have to play the cards you’re dealt.

Michael and I spoke about good and bad luck in the housing market on this week’s Animal Spirits video:

Subscribe to The Compound so you never miss an episode.

Further reading:
How the Fed Screwed Up the Housing Market

1And it’s worth pointing out I only have data through July 31, 2022. Mortgage rates have risen since then and housing prices haven’t really softened just yet so it’s only gotten worse.