The City of Edmonds administration and staff, in concert with paid consultants, have repeatedly commenced major projects and initiatives, many with serious policy implications that are leaving Edmonds’ citizens and indeed even city council in the dark. With no or very little prior knowledge, this has often left councilmembers scrambling to get answers and information for their constituents about these covert initiatives. Lack of transparency in this process is understandably leading to a growing lack of trust in how our local government functions.

Is it time for us to ask whether non-elected staff have exceeded their imperative?

City council has the authority to formulate and adopt city policies. One of our elected city council’s most important jobs is to listen to citizens and determine the citizens’ vision for the future of Edmonds. The mayor and staff may assist in the development of the vision through projects and administrative activities when asked to do so by the city council. City council deserves to know what staff is doing when its work goes beyond routine administrative business. How is it then that such major projects and initiatives listed below barely crossed the desks of all councilmembers? Voters elect councilmembers and count on their seasoned judgment, control of the purse and their ability to keep citizens informed. It may be that city staff are overstepping their role in Edmonds’ city government.

Some recent examples of controversial staff-initiated projects include:

There is a common theme to these projects. They are large in scope; they involve hiring numerous outside consultants; they are seen by many, even a majority, as controversial; and they would result in major changes to Edmonds, including transforming large portions of Edmonds’ neighborhoods into dense “urban environments.” There is much reason to be concerned that the process to conceive and advance these far-reaching initiatives has been flawed.

This staff-initiated process will prioritize citizen opinions from those whom staff defines as having been underrepresented in the past. There is evidence that such opinions would be given added weight and could result in discounting input from the rest of Edmonds’ residents. In fact, the Planning Department has proposed paying what it calls “community champions” for their input on everything from the PROS plan update to the Comprehensive Plan. In fact, staff has indicated that this framework will be used for all major projects and plans in the future (see excerpts from the EEF agreement below; the full document is a public record).

For an exchange of a mere $ 100,000, this grant would have resulted in a state-assisted, pre-planned upzoning template of 30% of Edmonds single-housed neighborhoods and the loss of local control over land use planning. Planning department staff not only initiated the letter of intent to apply for this grant, but advocated for pursuing it right to the end, with the development director working with two councilmembers to put it on the consent agenda, bypassing normal protocol to have staff present it to the fullc cuncil and the public to find out if this was even desired. Once it was made public, only then did the full picture become clear what was involved in asking for this state rezoning grant; and then staff got real feedback to find out there was overwhelming public and majority council opposition to it.

Edmonds residents have not been included in any kind of decision about whether we want to reimagine our neighborhoods and streets to the extent outlined in the meetings so far. The focus instead is on how supposedly “excited” everyone is about the prospect of “reimagined neighborhoods and streets.” Tellingly, although the initiative began as “reimagined public streets,” it now also includes reimagined “neighborhoods.” What does that mean? Is this an end run around zoning decisions? Also, how does this project relate to the Comprehensive Plan?

A one-page document purported to be a “survey” was distributed at the neighborhood meetings. However, these were in no way a tool to collect our opinions about the advisability of reimagining our neighborhoods and streets, but instead merely a rubber stamp of the project. And, shockingly, the planning department has stated that these “surveys” will be used to demonstrate citizen support for “Reimagining Neighborhoods and Streets.” (See inserted survey). 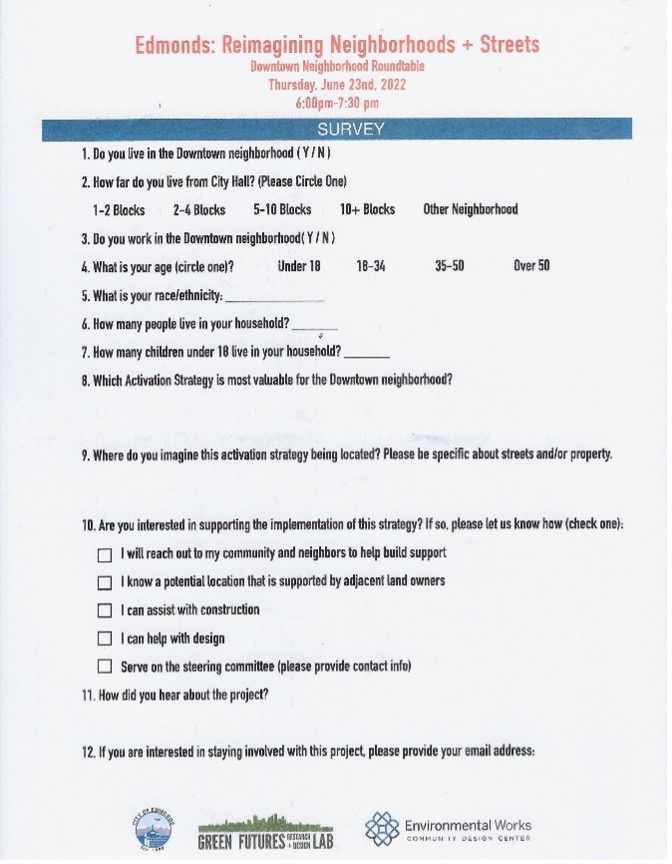 Note also that staff inserted a question that asks for the survey taker’s ethnicity. Is the purpose of that to facilitate certain citizens’ opinions being more heavily weighted? (See Reader view: Equitable engagement framework not what it purports to be – My Edmonds News June 6, 2022).

It is important to remember that we have an extremely compressed timeline to update all 14 elements, plus visioning and an Environmental Impact Statement, of what is our guiding document, the Comprehensive Plan. These piecemeal staff-generated initiatives do not equal comprehensive public visioning for the community as a whole. Of most concern is whether these are attempts to use pre-determined outcomes, developed with limited public and council input and feedback, to reach a one-sided and consultant-driven vision for Edmonds. Is this all the public opportunity for involvement in crafting the vision of our city that our community will be given so that staff and consultants can craft their future for Edmonds?

We should be wary of a vision for Edmonds independently developed by staff and consultants, a vision that is not consistent with what a majority of Edmonds’ citizens want. Let’s return to a transparent and inclusive process for envisioning Edmonds’ future. This is a process where our elected council develops, with input from our citizens, through our Comprehensive Plan, a vision for our city.

– By Dr. Michelle Dotsch, president and Laurence Williamson, treasurer
on behalf of the Board of The Alliance of Citizens for Edmonds (ACE)