Boston Consulting Group has released its latest ranking of the most innovative companies in the world, with well-known – mainly American – multinationals dominating the list.

For the second consecutive year the world’s most innovative companies list is topped by Apple, with Microsoft and Amazon hot on its heels. Another US tech giant, Alphabet (the parent of Google), ranks fourth, while Tesla maintains its fifth place vis a vis the 2021-edition of the list. The top 10 is completed by Samsung, Moderna, Huawei, Sony and IBM.

Similar to the top 50 of the past five years, more than half of the companies on the list are headquartered in North America. Meanwhile, Europe is notably losing ground, having seen its representation drop by three positions.

The gap that Europe is leaving behind is being filled by Asian companies, according to the research. Between 2018 and 2022, companies from Asia Pacific and Asia saw their representation grow from 4 and 3 in 2018 to 8 and 7 this year.

In its study, the consultants also tried to unravel how leading innovators set themselves apart from the rest.

Obviously, leaders are more mature in the way they manage innovation. This is true for all facets and phases of the innovation lifecycle, from strategy and governance to project management, funding and execution. There remains “significant improvement potential”, however, mainly in the areas of funnel management and portfolio management. 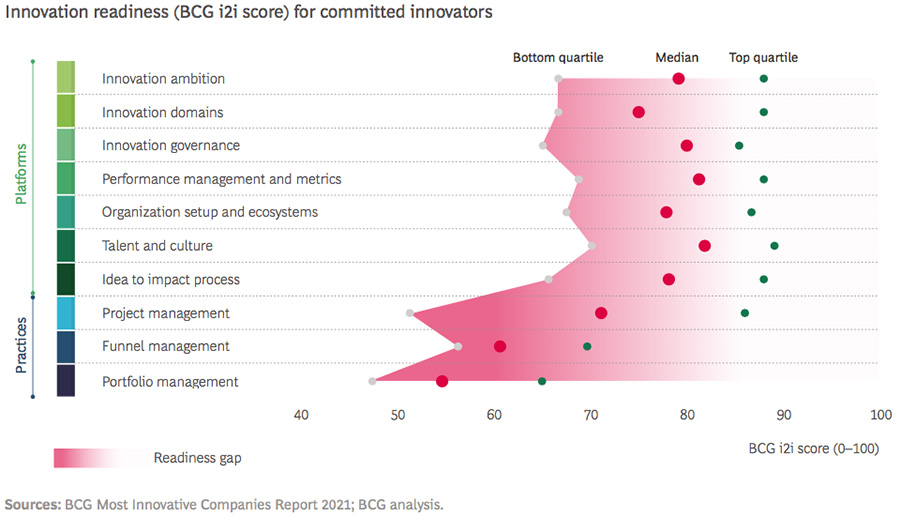 Backing their own benchmark, the researchers further pointed out that nearly 90% of the top 50 companies have top-quartile ESG scores in the latest benchmark by Refinitiv.

Other factors that according to Boston Consulting Group can clearly be linked to top innovation performance are a culture of (continuous) business model innovation, the ability to use data-driven insights to shape strategy and decision-making, the maturity in scaling innovation and bringing to market fast, and the use of external vehicles such as partnerships and corporate venturing.

Previous editions of Boston Consulting Group’s annual innovation report identified spending in research & development, forward-thinking investments in periods of downturn, applying agile and lean methodologies, and a people & talent culture that embraces innovation (and is not afraid of failing) as key success factors for innovation.